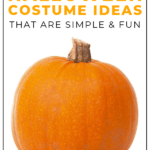 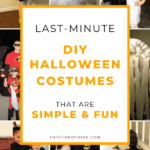 Need some last-minute Halloween costume ideas? Check out these costumes that are perfect for kids, parents or the whole family!

Halloween is one of our family’s favorite holidays.

We love to dress up. But we always find ourselves waiting until the last minute to come up with costumes!

And I have to confess…I hate buying expensive costumes. It’s not where I want to spend my money.

So every year, we come up with more last-minute Halloween costume ideas. We love them because they’re silly, fun and inexpensive! And we love making them together.

I have to warn you, though. None of these pictures are beautiful, Pinterest-worthy shots. They’re real-life. And they’re all taken during Halloween parties, so they’re not perfectly posed.

But, I love getting Halloween costume ideas from other families. So if you’re the same way, I hope you get an idea or two from these!

Here are some of our favorites:

Cinderella and her mouse

I got Cinderella’s dress here. It was great quality, especially for the price!

For the mouse costume, we glued cardstock ears to a headband. The tulle skirt is DIY. And we already had the gray leggings and onesie.

Peter Pan and His Shadow

For Peter Pan’s Shadow, I snagged one of these from a friend. His shirt, hat and boots are exactly the same as Peter Pan’s, just in black material!

For their noses, we rolled up pink cardboard. Then we punched a hole in each side so we could tie on a piece of elastic. We finished them off by gluing a circle of cardstock on the tip and drawing on the nostrils.

Carl and Ellie from UP

Carl’s glasses are from the dollar store (with the lenses taken out). Then we just threw some warm clothes on him and gave him a bowtie.

His walker is PVC pipe with tennis balls on the bottoms. Oh and helium balloons on top of course!

Ellie also got some dollar store glasses (with the lenses taken out). She also got a wrinkly makeover with some pencil eyeliner.

I love it when my kids’ costumes go together. But it’s fun for them to dress up separately too!

For our cat, we found a headband with cat ears. I also got lucky and found a dress-up cat’s tail at a thrift store! It tied on like a belt. For her clothes, she just put on warm black clothes and we finished it off with a sparkly long skirt.

For our scarecrow, I picked up some overalls at a thrift store. I found fall-themed fabric squares at Michael’s and hot glued them on. Then I hot glued hay (also from Michael’s) everywhere. For his hat, I wrapped up some burlap and glued on more patches and hay.

This costume was fun to make. We wrapped two boxes in tin foil. We also wrapped parts of an egg carton in tin foil for the buttons. Then we just got creative with the other parts of the body and hat.

To finish this costume off, we found a battery-powered light at the dollar store and stuck it on the top of the hat. Then we covered his arms and legs with dryer vent hoses and wrapped his shoes in tin foil.

Our bald little baby was Mr. Clean one year. We used lubricant jelly to stick his cotton ball eyebrows on. (Yep, like KY! Embarrassing, I know, but it’s the same trick nurses use in the hospital to stick bows on bald baby girls’ heads!)

I printed out a logo and stuck it on a white onesie and used a clip-on gold earring (that lasted only as long as it took to take this picture!) to finish this costume off.

This is a super simple costume. We strung battery-powered fairy lights along the inside of a clear umbrella. Then we just taped white crepe paper around the whole thing. That’s it! Underneath, our jellyfish just wore all white. 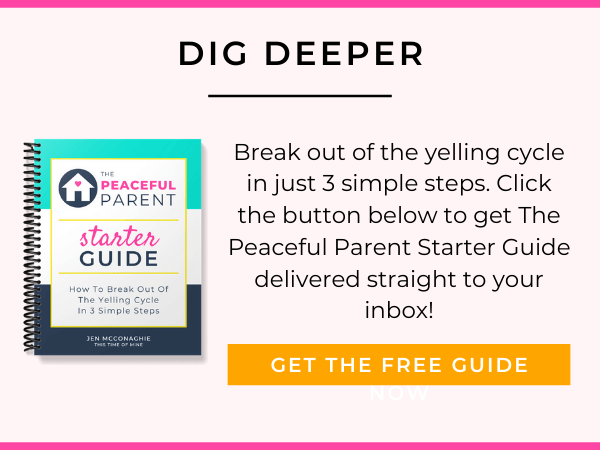 For the whole family

There’s no way we could have skipped this family costume. We have the same setup as the cartoon!

We got the templates for the logo from this tutorial by While They Snooze. They’re made of felt and glued onto red t-shirts from Michael’s.

Parents can have fun dressing up too! Here are a few costumes for couples.

Wilson! This costume was easy, but it wasn’t exactly last-minute. It neede an extra day. That’s because we did some papier-mache (around an exercise ball) and needed time for it to dry.

When the ball was dry, we deflated the exercise ball, cut holes for the body, arms and head and painted on Wilson’s face.

Chuck Noland is just wearing a wig. And we didn’t have an actual FedEx box, so we just printed out the logo and taped it to an empty box.

This one truly was a last-minute Halloween costume. We needed to be in full glow!

Here, I used this Flo costume and Mayhem looked nice and bruised with the help of some makeup!

Did you ever see this video? It’s obnoxiously catchy and gets stuck in your head way too easily!

For a while, our kids sang it a lot. It was in our heads when we decided to come up with this silly costume.

Here’s a tutorial from Sugar Bee Crafts for the pineapple headband. The shirt detail was drawn with a brown paint pen. Our pens are rolled up poster board and cheap floral foam covered in black duct tape.

I was pregnant 4 times. And of course, I took advantage of it when Halloween came. Why not?

The only one I don’t have pictured here is my first pregnancy where I was Humpty Dumpty. It was similar to this.

Here are the other 3:

This one’s a stretch, I know. But I was barely pregnant, NOT feeling well, and wanted a silly way to announce I was pregnant.

Our little Oompa Loompa was “eeny” since she was so little. I was “meeny” (an angry bird – with a few pregnancy hormones…) My husband was “miney” (a miner). And our new baby was “mo”- because we were adding one mo’ to the family!

For this disco ball belly, we cut up squares of shiny silver duct tape and placed them all over a black camisole I wore underneath my clothes.

Then we pieced together 70’s style clothing and I found an afro wig.

This one is also a stretch, but it was another true last-minute Halloween costume!

I’m a cat holding a cardboard fiddle. There’s a little stuffed cow (thanks Chick-Fil-A) pinned to my shirt. It’s “jumping” over the moon, which is just my belly with a white camisole.

And my husband’s poor costume is a cardboard dish and spoon that we spray painted silver, tied to a string and slung over his shoulder. I told you it was a stretch!

Like I said before, we love Halloween, but we usually wait until the last minute to figure out our costumes. I guess we think better under pressure!

But it goes to show that you don’t need tons of time or money to have fun!

Have you ever pulled off a last-minute Halloween costume? I’d love to hear about it!

want to remember this?

PIN IT TO YOUR FAVORITE BOARD

and I'm on a mission to help you raise confident, resilient kids with a growth mindset! I believe that the best way to impact a child's life is to empower their parents. And I'm here to help with that.

Ready for kids who love a good challenge? Get the FREE guide.